Originally Published in The Reporter on October 13, 2017 By Jessica Rogness. 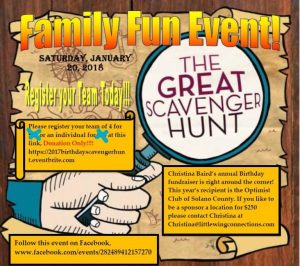 A pair of Vacaville events originally scheduled for this week have been postponed to January.

The Vacaville Chamber of Commerce rescheduled its Friday Business Issues Forum that had been set to discuss the Measure M 3/4 cent sales tax.

Vacaville voters approved the sales tax in November 2016 and it takes effect in April 2018.

The forum was scheduled for members of the public to share how they recommend the mayor and Vacaville City Council prioritize spending the tax revenue.

The forum has been moved to January, though a specific date has not yet been announced.

Another event, the Great Scavenger Hunt slated for Saturday, has also been rescheduled for January.

Christina Baird, a Vacaville business owner, community services commissioner and organizer of the event, grew up in Santa Rosa. Thursday, she returned to her hometown to help first responders to the fire, setting up her Holy Mo’s hot dog cart to serve food at the city’s Emergency Operations Center.

This is the fifth year Baird plans to dedicate her October birthday to supporting youth in the community.

Donations to the event will go to the Optimist Club of Solano County to support youth organizations and events in the community.