Pass a Sexual Assault Survivors’ Bill of Rights in California

Originally published on Change.Org in March, 2017 By Flannery From California. 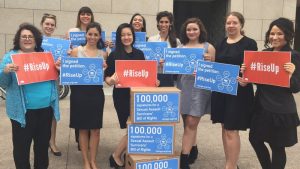 California is close to passing a Sexual Assault Survivors’ Bill of Rights that will guarantee comprehensive, common sense civil rights for survivors like me.

In March of 2015, I was sexually assaulted by a man I was dating. When I tried to stop his unprotected advances, he forced himself on me.

It’s hard to put into words exactly what one goes through after such a trauma. I think the best way to describe my experience is something akin to being on a roller coaster during an earthquake in the midst of a storm.

I spent a year and a half lost in a sea of conflicting emotions, feeling like I had few options at my disposal. Legal action didn’t seem like an option- my case would have presented itself as “she-said-he-said”- and that silence filled me with shame and guilt as my assailant was free to attack another. I felt I had abandoned other potential casualties instead of doing whatever I could to halt future victimization. Not only had I felt silenced by my attacker, but after, I felt silenced by how few basic protections exist for someone like me.

I’m now part of an organization called Rise, who worked to pass the first ever Sexual Assault Survivors’ Bill of Rights at the federal level last year. We were successful but now states like California must enact these protections.

Our legislation, AB1312 has already unanimously passed the state Assembly and Senate! Here’s what it would accomplish if Governor Brown signs it into law:

Over forty states have backlogs for untested kits. Some states do not cover the full medical expenses of a kit, leaving survivors to pay their own way towards justice. Most states destroy rape kits before the statute of limitations for the crime has passed. The lack of these rights has inspired me to act.

My story is not unique. I am still working hard every day to quiet the storm, calm the earthquake and hop off the roller coaster. I am still relearning how to live my best life. There are approximately 2.5 million survivors of rape and 8.6 million survivors of sexual violence other than rape living in California alone. That means there are roughly 11 million stories just like mine. 11 million Californians who are left to navigate a confusing and murky criminal justice system on their own- while at their most vulnerable.

We are working to change that. We are working to better protect our civil rights and ensure that the criminal justice system can best support and protect our community, which sadly continues to grow.
Let your voice be heard! Join me in telling Governor Brown to sign the California Sexual Assault Survivor’s Bill of Rights- AB1312

If you live in California, please sign this petition, This is a crisis for 25 million survivors across America, and it’s time for our legislators to do something about it.