Originally published in The Vacaville Reporter on June 8, 2017 By Kimberly K. Fu. 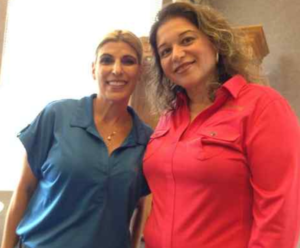 Today marked the finale of the Little Wing Connections Accountability and Contribution luncheon, two years short of their initial goal.

“I feel like we’ve done great work, coming together and bringing a community of professionals together,” said Corina Urtiaga-Michael, event cofounder.

“It was a great learning lesson,” added Christina Baird, cofounder and Vacaville community services commissioner.”We tried to teach people to humanize marketing, humanize the sale. I believe we did that.”

The event came together out of a need to give back. People were in a downward spiral because of the recession, were re-evaluating their careers and their lives and, at the same time, looking to give a hand-up to others.

Baird felt businesspeople would do better if they humanized their efforts and put a face to their name by becoming even more involved in the community.

So, for $15 a month, the business community attended lunches, heard from speakers and learned about those in need in the community.

“It encouraged all of us to do our part within the community,” she said. “It’s been a great experience.”

Baird emphasized that this was not a sad moment, but one of joyful closure.

“I feel like its made its point,” she said. “At the eight year mark, I think we’ve done what we set out to do.”

She added that it’s made her a better, more well-rounded person.

Monte Hoover, who has attended from the beginning, said the lunches provided opportunities for him to give back.

“I was inspired,” he remarked. 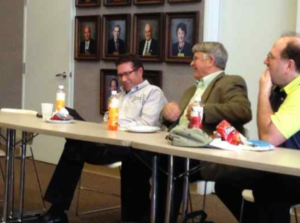 Kimberly K. Fu — The Reporter Monte Hoover, left, and Scotty Sanderson, middle, explain the impacts an eight-year lunchtime gathering has had on them.

“What I love about this group is that I’m always reminded of the right side of business,” he said, “of giving back to the community.”

The connections he’s made, he assured, would last past this last luncheon.

“So I’m sad to see this end because I’ve enjoyed coming here,” he shared.

Mark Boettcher said he loved hearing what everyone had to say and how he could leverage that information to become a better person.

“I love hearing the energy of what’s going on in the community and it also gets me thinking what else we could be doing,” he said.

“To know that people care and they want to make a difference.”

As the luncheon meetings come to a close, Baird and Urtiaga-Michael have launched a new venture.

Holy Mo’s hot dog cart will be a fixture at Five Star Car Wash in Vacaville and Fairfield on weekends.

The Vacaville opening will likely happen during the Father’s Day weekend.

As car wash clients wait for their vehicles, they’ll be able to grab sustenance from the hot dog cart, which will start out selling a couple types of hot dogs. The business will be family run, the women said.