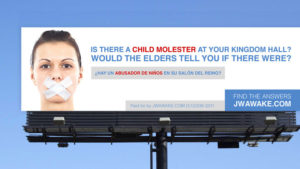 The organization known as The Christian Congregation of Jehovah’s Witnesses or Watchtower Bible & Tract Society headquartered in Brooklyn, New York, have for many years enjoyed what is known as 501(c) (3) status whereby a nonprofit organization is exempt from paying federal income tax if its activities have the following purposes:

Exclusively for religious, charitable, scientific, literary, or educational purposes, or for testing for public safety, or to foster national or international amateur sports competition, or for the prevention of cruelty to children or animals.

This religious organization has failed miserably when it comes to protecting children and their membership in general from child molestation, rape, and overall sexual assault.

For many years, their claims of protecting minors, the most vulnerable in their care, have fallen disgracefully short when the track record of pedophilia is examined. A closer look will show that this organization actually encourages victimization because of its biblically misconstrued policies. We believe this calls into question their charitable status.

Many cases regarding these sex offenses have been settled in the US and many cases are pending where the leadership of this organization failed to keep parents and their congregations as whole informed of known pedophiles and sexual predators in their midst. These predators, as practicing Jehovah’s Witnesses, have been allowed to hold trusted positions of authority within their congregations as what are known as Ministerial Servants and Elders. Even known sexual offenders who are not in these official leadership roles have been allowed to take the lead in field service activities. These known pedophiles proselytize in public as well as conduct unsupervised, one-on-one bible studies with minors.

Because of these weak organizational policies, the Watchtower organization has been sued multiple times for millions of dollars in compensation for sexual abuse in the United States and globally. The current policies of the Watchtower Bible and Tract Society and the Christian Congregation of Jehovah’s Witnesses are not protecting the donated funds of its members so as to be used for its intended purpose, the worldwide preaching work. In light of their frequent real estate purchases and sales, we believe the Watchtower organization may be profiting and not redistributing funds properly as a charitable organization. We believe this calls for an audit on behalf of the Internal Revenue Service revealing the true allocation of funds and to verify if donated funds are being properly utilized as demanded by charitable organization status.

The Watchtower leadership has arrogantly refused to show up when subpoenaed for court to answer for child abuse allegations. They have destroyed or refused to submit thousands of internal records regarding the investigations of child abuse within their organization.
The Australian Royal Commission into Institutional Responses to Child Sexual Abuse is investigating the Watchtower Society for mishandling complaints of sexual assault and for using intimidation tactics. Also, the local elders, who feel pressured by their respective branch offices, are being investigated as to why they discourage victims of assault to report these matters to the authorities and qualified mental health professionals, such as therapists and psychologists.

The Watchtower leadership has recently admitted to withholding 1006 cases of child abuse complaints and investigations spanning decades within Australia alone. Their policy on no lifesaving blood transfusions has also caused the needless deaths of many Jehovah’s Witnesses including children.

unyielding, dangerous, and outdated policies on shunning or excommunication known as disfellowshipping
child abuse
the banning of lifesaving blood transfusions that affect children which would classify them as a cult- like organization that fails to protect children, and causes harm to minors and the general health and well-being of the public.

We, as current practicing as well as former members of this organization, as well as others who are not affiliated with this said organization, feel very passionately and strongly that these child abuse offences and outdated policies must come to light and deserves more coverage in mainstream media in the United States. It would be the responsible action for the IRS to revoke their 501(c) (3) status as a tax-exempt nonprofit organization.

This petition will be delivered to:
Internal Revenue Service