Vacaville program shelters the homeless from the storms 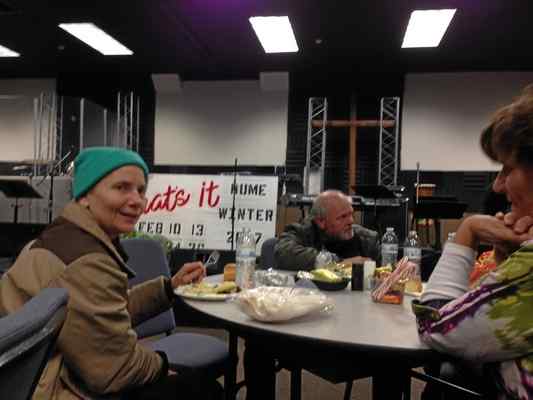 The season of heavy rains and frosty temperatures may be upon us but at least in Vacaville, those seeking refuge from the storms have found it.

The sophomore effort by Mission Solano in partnership with There’s A Better Way — Vacaville, the product of Vacaville’s Homeless Roundtable, has seen 25-plus clients per night, many of them return visitors from the previous year.

It’s been a mostly uneventful few weeks, said Raleigh Galgan, program coordinator and head of TABW. He, TABW Navigators, or volunteers who help homeless clients with all kinds of resources, and others work to ensure the comfort and safety of all at each host location. Following the intake process, the clients hop on a bus to the host location. They’re provided with meals, snacks and a movie while also enjoying conversation, fellowship and camaraderie.

The program was born out of worry for those living on the streets during last year’s bitterly cold El Nino winter.

Clients have shared their thanks for the effort.

“I love it here,” expressed Sylvia Byrne. “It’s all nice, clean. You have nice, clean blankets, a clean bed. You get good fellowship and I feel very safe.”

Byrne is a Navy veteran who came to Solano with her children years ago, when her then-husband was stationed here. Slowly, though, she began to sink, and lost herself and then her family.

These days, she lives under a bridge and spends much of her time there or at the Cultural Center library.

The sheltering program has gotten her out from under the bridge, at least for awhile.

“It’s not cold, it’s not wet, it’s not dirty,” she explained. “It’s comfortable and it helps those that really need it.”

The atmosphere is an open one, he said, and it’s a comfortable place to be.

“They don’t push,” he continued. “They don’t cram God down your throat. They have rules, but everybody has rules.”

If you listen, he said, there’s also important lessons.

“They have a message,” he pointed out. “And everyone can use a message of hope.”

About 12 years ago, Wilson was a happy family man. Until disaster struck.

As he tells it, he had just picked up his wife and their newborn from the hospital and were headed home when their car was struck by a drunk driver. His wife and child died instantly while he survived following extrication from the vehicle. He lived life in a fog, mourning their loss and popping dope like candy, he said. Life further spiraled and he spent time in prison, then ended up on the street.

These days, Wilson is getting his life back together. He and his girlfriend are saving to get a place of their own and he’s waiting to hear back from prospective employers. If all goes well, he’ll snag a job that will allow him to make life better for the couple and their young children.

For Deborah Ott, a volunteer, hearing these stories and helping clients get back on their feet is everything.

“My heart breaks all the time,” she said. “So anything I can do to help…”

For more information about the program or to get involved, visit http://bit.ly/2jMy9md.