Community turns out to help those in need 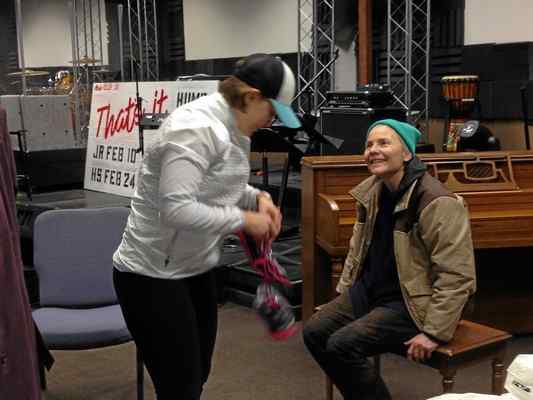 Three weeks in, the community has turned out to aid the hopeful clientele of Vacaville’s sophomore winter homeless sheltering program.

Along with food and fellowship, individuals and groups and even businesses have shown care by offering clothing, shoes, the affection of a happy, slobbery dog and other resources to those in need.

“It’s a hand up not a hand out,” reminded Pastor Raleigh Galgan, who heads There’s A Better Way, the group behind the sheltering program.

Attendance has been steady at the various shelter outfits, which have included a multitude of churches playing host from anywhere to a day or two to weeks at a time. Thus far, anywhere from 20-30 clients have sought refuge each day, receiving meals and a safe place to sleep overnight out of the cold and rain.

On a night early in the program, Fleet Feet of Vacaville arrived with plastic tubs packed with colorful athletic shoes, warm jackets and sporty shirts and pants in all sizes for both men and women. Curious clients gathered round, eyeing the goodies as they were piled high on folding tables in the dining room at Valley Church, the host organization at the time.

As she readied the goodies, DeHart explained that some of the items were customer returns and others were close-out buys. All were relatively new, in great condition and slated for community distribution. As a Valley Church member, she had heard about the sheltering program. Subsequently, this block of items was designated for the homeless neighbors.

“It’s a great way to give back to the community,” said DeHart.

“Just look at this,” enthused Galgan, passing by the distribution table and noting the hopeful faces. “This is great.”

The lovable pooch had toured first Epiphany Church, where clients were served dinner and dessert, then Valley Church, where they later relaxed and bedded down for the night.

“He loves this,” Baird said, as her Hooch-lookalike, aka “Turner and Hooch” with Tom Hanks. “Look at him, he’s so good.”

He was — cool, calm and collected, his tongue lolling out as new friends patted his wrinkles and rubbed his sides. He smiled, allowing the cuddles and effecting relaxation in return.

Of course, there were some reluctant to come near, loudly announcing their fear and providing a wide berth as they passed. The dog respected the sentiment, taking no offense.

About a handful of days later, Pawsh Place Veterinary Clinic and Boutique in downtown Vacaville gave a homeless volunteer’s service pup a bath and vaccines.

Pint-sized Charlie Mac, once a dirty Vanilla color, got a new do and more compliments of the clinic and sported a joyful new outlook at well.

Want to help out? You still can. Volunteers and services are greatly appreciated, Galgan said.

Simple and in need — meals. If you can provide a breakfast, lunch, dinner or snack, clients and staff will thank you.

Funding is also sorely needed to cover items including staff, transportation and other logistical expenses.

To donate, visit the GoFundMe page at www.gofundme.com/theresabetterway.