Silencing the Past by Speaking in the Present – Part 2

Originally published on AReturntoYourGenuineSelf on July 12, 2016 By Jodie Ortega

This week, we continue our series with powerhouse speaker and survivor, Jodie Ortega. This week, she shares about her experience of crying out for help but being left to fend for herself. 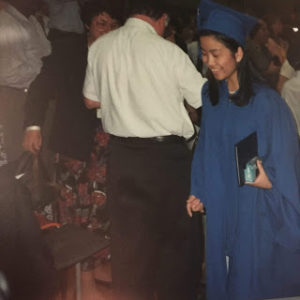 I was a teenage girl wishing she had teenage-sized problems.

I woke up every morning pissed off that I was still alive. I cursed the sun for shining and for mocking me through the window blinds with no disregard for the sleep paralysis that took over my body the night before. I despised the sun’s inability to dim its rays to pay respect to the horrific abuse I had endured in my own home. A morning person, I am not.

At 17, I learnt that the world does not stop for your sorrow. Time marches forward unforgivingly. I wanted these waves from this ceaseless tide of emotions to sweep me out to sea. Shame, silence and cultural pressure was drowning me. My body’s thermostat seemed to only have two settings: feeling raw and feeling numb. The emptiness I felt, albeit unshakeable, had become commonplace.

Through therapy, I know that the teenage girl in this photo is me, even though I do not recognize myself and remember my high school graduation day. Sexual abuse is a kleptomaniac. It has stolen and erased most of my life.

If you were to dissect my high school years you would find a girl who showed all the signs of sexual abuse, yet nobody caught it. Not a teacher, coach, friend, my co-workers at McDonalds, and definitely not my parents.

There was the rapid decline of grades. How does a kid go from being an Honor Roll student with a 4.0 grade point average in her first two years of high school and then end up in detention IN summer school in her 11th grade?

My notorious tardiness looked like I was a lazy teenager, but I was not exactly going to tell the school secretary that I was having recurring nightmares of my rapes. No one ever sat me down and questioned my excessive aggression during field hockey games and tae kwon do classes, even when I would get ejected from a game or lost a belt ranking.

I sent out countless distress signals but they either went unnoticed or misdiagnosed as, and I quote my high school counselor when I say this, “…a rebellious teenager crying out for attention. Now get back to class!” I was writing a suicide note during my Law class in my senior year when my teacher, Mr. Bevacqua, starting getting philosophical on us on the fragility of life saying that in ten years one of us students would be dead. I actually wanted to put my hand up, because I was convinced it would most likely be me.

The first thing that was stolen from me when the abuse started at 4 years old was my power to choose.

My grandfather’s decision to start intentionally molesting me overrode my choices.

In May 1984, a month and a half before my fourth birthday, my parents, brother and I were sightseeing in Palm Springs. My paternal grandparents came along. We were visiting one of the many show homes that the city was famous for. I remember finding myself alone in one of the rooms with him when he picked me up and placed me on his lap. What started out as a tickling game quickly turned into, well, something else.

I became an adult that day. A soon to be four year old girl with adult sized emotions. But because of what he was doing to me was too much for my almost four year old brain to process, I forgot the early years of sexual abuse. My method of survival was forgetting.

The sexual abuse continued for 10 years. When I was 14, my grandfather brought me to a house where there were other men there. We would go to this house more than once and every time I went there, I would be drugged, blindfolded, and raped.

When my parents finally found out I had been molested through my then boyfriend in the early 2000’s, there was a family meeting. I was not in attendance but my parents, grandparents and father’s siblings were there.

I was told that my grandfather sat in silence the entire time and that when he was asked why he molested me his only response was, “We were close.”

He showed no remorse. Child molesters rarely do.

He walked out of the meeting a free man. No one reported him to the police. He continued to be around children.

You ask my mother today, tomorrow or ten years from now as to why no one in that room reported my grandfather’s crimes to the police the answer will still be the same.

“We just do not do that in our culture.”

“We just do not do that in our CULTURE.”

I look back now and realize that that family meeting was not about how these adults in my life were going to support me in recovery and assist me in seeking justice, it was more about how they were going to keep “this” a secret in order to protect the family name.

The potential shame of losing “face” and embarrassing the family name was more important than supporting me.

The most disappointing thing about betrayal?

It rarely comes from your enemies.

Physical discipline lies in the root of Asian culture. “Time out”, “naughty step” or “child abuse” is a foreign concept. For example in Vietnam, physical discipline is the traditional method of raising children and is an integral part of Vietnamese culture.

Could it be that the reason why sexual abuse in Asian communities is swept under the rug and heavily unreported is because many Asians believe that this type of behavior ties along with physical discipline?

The crime of sexual abuse thrives in secrecy and silence. Wrap that with shame and add another layer of stigma, and there you go – the perfect recipe of survivors being forced into a lifetime of suffering in silence.

A third of people who know that a child has been sexually abused do nothing. Please don’t be one of them.

How do we break down these cultural walls and replace it with bridges? I look forward to continuing next week with the important conversation of cultural shame. Til then, I’d love to hear from you. Please comment below, share, or email me dontrunbabygirl@gmail.com.