Silencing the Past by Speaking in the Present – Part 3

Originally published on AReturntoYourGenuineSelf on July 20, 2016 By Jodie Ortega

This week, we continue our series with, Jodie Ortega who highlights how many cultures perpetuate the silence of abuse. 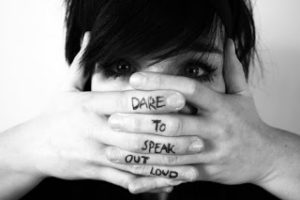 Part 3 is in solidarity of July being Minority Mental Health Month.

I was a young adult that could no longer keep a secret.

I was at my then boyfriend’s house. Through hysterics and fractured sentences, the truth spilled out like sea shells washed up on the beach, each horrific detail was sharp as a broken sea shell. I cried myself into a black out. I woke up to hear him on the phone with my parents.

“I think Jodie was molested by her grandfather.”, he said quietly.

He came to my bedside and asked me, “Were you molested by your grandfather?”

“You know, sexual abuse. Did your grandfather sexually abuse you?”

I was shocked. There was an actual word for it!

I did not know what sexual abuse was until AFTER it happened to me.

That’s a little too late, don’t you think?

As a child of Asian immigrants, I grew up with messages of conditional love, shame, and the need for secrecy. Like many Asian children, I was raised under a strict disciplinary structure and parental relationships were fear based. High standards and physical discipline were enforced to prevent my siblings and I from tainting the family name. There was no room for failure which meant problems (read: trauma, mental health) were not discussed openly. Academia on the other hand, was valued more than anything, and most of the time, worth more than my essence.

In the 8th grade, I brought home a 98% in my Science test to proudly show my father.

My report cards were faxed to family members far and wide so everyone could join in on witnessing the academic achievements of the eldest child of the eldest son of Adriano (aka my rapist) and Milagros.

The ladder of cultural expectations have perpetuated and perfected the image that all Asian youth are high achievers and whiz kids. Society has eaten this up.

I had a classmate in high school who assumed I was on the Honor Roll in 12th grade simply because I was Asian.

We’re not all the same. And in believing that we are systematically silences us and further conceals societal issues like sexual abuse within our respective communities.

Underneath the illusion of scholastic perfection, many Asian youth struggle with depression, post traumatic stress, suicidal thoughts, often without their parents knowing. Cultural shame, secrecy, stigma and silence drowns out their silent cries for help. How can we turn ladders into bridges?

Our brains are built on our experiences and the stress of sexual abuse damaged the basic structures of my developing brain, impairing my ability to manage my emotions and cope with stress. If my sexual abuse started at four, then what state of chaos was my brain in when I started high school? The aftermath of sexual abuse kept my brain and body on a constant high state of alert. Neuroscience tells us that the brains of kids that experience sexual trauma are hardwired for survival.

I wanted to die.

My biggest dilemma was not how I was going to balance homework with my part time job at McDonalds like any “normal” teenager, but instead which method of suicide was going to kill me faster; jumping from the overpass near my house or just slitting my wrists?

Telling my parents I had been sexually abused and exploited was not an option. But jumping from an overpass into oncoming traffic during rush hour definitely was!

If your relationships with your children are rooted in fear, how can you expect your children to willingly come to you when they’re having a problem?

Since publicly breaking my silence in 2012, I’ve come across people of Asian ethnicity that refuse to engage in a discussion about sexual abuse and mental health illnesses, primarily because of the cultural taboo with admitting a problem in the first place – because that would be at the opposite end of perfection, right?

For example, not only is the Philippines the sexual abuse capital of Asia, it is now the epicenter of the live-stream sexual abuse trade.

And the Philippines biggest export?

Yet, you bring up any of these facts with Filipinos, most will immediately dissociate themselves from the problem.

“Oh, that doesn’t happen in the city where I’m from.”

The stigma surrounding sexual violence in Asian communities is thick and decades deep, but to pretend no problem exists does not help. As I mentioned in my TEDx talk – abuse thrives in silence.

For this blog series, I interviewed two survivors from Asian backgrounds. The similar personal narratives were striking.

“Being Chinese, nobody really speaks straight in general, let alone on issues that are considered taboo. My parents did not teach me about consent. It made it easy for me to internalize that my body wasn’t my own (as a result of rape culture/general society, as well as many interactions with boys taking liberties) and to this day I still have to work at not disassociating from my body when being touched. While I’m not certain my parents would blame me for “putting myself in a situation to be assaulted” or not even believing that what happened to me was rape because I didn’t kick and scream, I wouldn’t be surprised if they did have that reaction. I don’t even tell them when I’m sick because they’ll tell me it’s because I didn’t wear a thick enough jacket or I sleep too much/not enough or some other stupid reason. There’s no way I’d tell them about my assault.”

A lot of Asian parents don’t realize that trust based relationships and open communication is vital to raising well rounded children.

My paternal grandparents raised their children to become a trophy case of University graduates, but their encasing dulls their shine, revealing severe emotional deficiencies. That “family meeting” I talked about in part 2? Even though I was not in attendance for it, I know that it was basically a dysfunctional group of incompetent communicators halfheartedly navigating around a topic they lacked the empathy and patience to understand. Sweeping it under the rug was their pathetic “call to action.”

Turning a blind eye to a child being sexually abused is not denial. It’s called being an accomplice.

How can we create a cultural shift in Asian communities to prevent serious problems such as sexual violence from going undetected?

Does traditional Asian parenting set children up to be at risk of being sexually violated?

I would love to hear your thoughts and look forward to having you join me next week in part 4 of these series.