Church cloaked in culture of silence

Originally published in the Boston Globe on February 24, 2002 By Thomas Farragher. 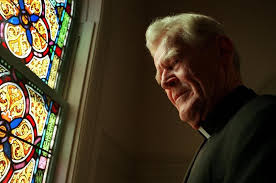 Rev. Robert Bullock, pastor of Our Lady Of Sorrows in Sharon, said “I wonder what else we could have done” about child molesters in the church.

For a church that celebrates mystery and often speaks in whispers, it was the most closely held secret of all.

Catholic priests were molesting children, crimes so unspeakable that the Archdiocese of Boston went to extraordinary – and expensive – lengths to cover up the scandal.

Settlements were confidential. Predator priests were quietly transferred or placed on leave. Details were private.

But now as the aftershocks from the abusive priests scandal continue to register across the archdiocese and the nation, startling unsuspecting parishioners, its emerging details do not surprise some former colleagues of the convicted and the accused.

Like good cops aware of precinct-house misconduct, some parish priests and pastors, steeped in the church’s culture of silence, knew or suspected who some of the abusive priests were.

When the Rev. William C. Francis was asked in a deposition last year about what he knew about John J. Geoghan, the now-defrocked priest convicted of molesting a 10-year-old boy and accused of abusing 130 other children, Francis replied that there was “general talk amongst priests in the archdiocese.”

“What was that general talk?” Francis was asked.

“Well, when he was removed from St. Brendan’s in Dorchester [in 1984], there was talk that he had been fooling around with kids.”

That grapevine gossip would be enough to trigger a formal report to authorities today, several priests interviewed for this story said. In fact, a new church policy would require priests to report accusations of sexual abuse.

But before the church’s newly adopted zero-tolerance policy toward accused child molesters, its rank-and-file clerics deferred to an authoritarian institution and, they said, assumed church officials were acting to protect the children.

“We heard things,” said the Rev. Robert W. Bullock, pastor of Our Lady of Sorrows Church in Sharon. “We wondered about this one or that one. He hasn’t been assigned. We read that he’s on sick leave and we’d wonder about that. There was like general talk and general impressions. I wonder what else we could have done.”

The Rev. Vincent R. Maffei, who was pastor of St. Martha Church in Plainville in 1992 when the Rev. Jay M. Mullin was removed from that parish over an accusation of molesting a boy in Allston in 1970, said candor was not encouraged.

“It wasn’t something we talked about,” said Maffei. “It was the rumor mill. And then somebody went off the radar screen and you’d say, `Oh, what’s going on here?’ It was kept quiet. That’s the way they felt it should be handled in that day. . . . It was this whole secrecy thing of trying to solve our problems quietly. That was the decision of the people in charge. And it has backfired something fierce.”

Attorneys and some victims have said that, in individual cases, the secret settlements of child molestation claims insisted on by Cardinal Bernard F. Law’s lawyer, Wilson D. Rogers Jr., were appropriate.

The cases were settled quickly. The victim’s privacy was protected. The church promised to protect children from abusive priests.

But one effect of the secrets shared by a few was that some priests re-emerged in parishes and priestly work, serving people with no knowledge that the man in the Roman collar before them had been accused of sexual misconduct with children.

Robert L. Hughes, vice president of Brockton Hospital, said that when the Rev. David C. Murphy, 65, was named part-time chaplain there in 1997, the hospital was not notified that Murphy had been accused of at least two instances of sexual abuse.

Murphy was among six priests removed from their assignments by the Boston Archdiocese on Feb. 7.

“We were unaware of what these allegations were,” said Hughes. “Since every employee here has a [criminal background] check, had this been known to us, we would have asked for additional facts. We might have come to a different conclusion. We might have been able to restrict his access to the largest pediatric services in the region.”

Hughes said there is no evidence that Murphy, who was on call at the hospital on weekends, acted improperly while on assignment there.

One of the most instructive examples of how the church acted quietly to remove, and then to reintegrate a priest accused of misconduct, is that of Mullin, who was taken out of his Plainville parish in 1992 and did not return to church work for more than five years.

In a curious two-step process, Mullin’s duties were gradually restored beginning in late 1997. First, he was introduced to parishioners at St. Ann Church in Wayland as “Jay Mullin” their new organist. Unexpectedly, three months later, he was wearing priestly vestments and celebrating Mass as Father Mullin.

How did the organist move from the choir loft to the altar? By Mullin’s account, it happened after he met one-on-one with Cardinal Law in early 1998.

Mullin, 62, described a 55-minute meeting with Law in the cardinal’s conference room, where he said they discussed their mutual interest in music and Mullin’s work with the St. Ann choir.

“We were there for about almost an hour,” Mullin said in a recent interview at his home in Harwich. “He finally said, `Jay, I’m going to make you parochial vicar there.’ I was thrilled. I didn’t expect it. But I said, `What about this whole thing that’s been going on.’ He said, `I trust you.’ “

A spokesman for the archdiocese declined to comment on the details of the reassignment.

Mullin’s reinstatement to the altar capped a more than five-year odyssey that began in the fall of 1992 when John B. McCormack, now bishop of the Manchester, N.H., diocese and then Law’s lieutenant for clergy personnel matters, confronted Mullin with an accusation of sexual molestation of an Allston boy.

Mullin has denied the allegation, but said the archdiocese settled the claim out of court for $60,000 about five years ago, an agreement to which Mullin contributed $10,000.

Publicly, Mullin was listed as “unassigned” or on “sick leave.” Privately, he was being evaluated by clinical psychologists in Maryland and in Ontario, Canada, and shuttled with other unassigned priests, some of whom Mullin said also stood accused of molestation, between church properties in Milton, Weston, and Georgetown.

“There was no ministry,” Mullin said. “I was not allowed to go and do anything in parishes. We were residents and you vegetated. It was really a warehousing.”

Church officials tried to persuade Mullin to leave the priesthood. When he refused, “They started to look at us in terms of, `Well, let’s get these people some meaningful occupations,’ “ he said.

Mullin said he compiled his resume and landed the job as organist and, later, thanks to Law’s intercession, as parochial vicar in Wayland.

If St. Ann’s congregation wondered where their newest priest had come from, their pastor, the Rev. Patrick J. Kelly, did not.

“They [the diocese] pointed out that allegations were made and nothing was ever proved and that he was cleared to come back, and I was glad to accept him,” said Kelly, now a senior priest in residence at St. Charles Borromeo in Woburn.

Mullin said that because he had suffered a heart attack in 1993 and later tore a ligament in his knee, the explanation to parishioners that he was returning from “sick leave” was not a deception.

“I don’t think there was a deliberate attempt to hide the facts,” said Mullin, noting that he told some parish friends about the allegation against him. He said his duties did not put him in direct contact with children.

If the church’s policy of secrecy is now a program of the past, that would be a refreshing change for priests like Bullock, who drew a distinction between confidentiality, which he said may have been warranted in some cases, and secrecy, whose consequences have rocked the archdiocese.

“There is among us all some kind of varying degree of collective responsibility that we knew, or were aware at some level of our consciousness, that there was this disorder that was present,” he said during an interview at his rectory in Sharon. “And we were disinclined to make an issue out of it.”

“I don’t know where that disinclination comes from, but I think it comes from the way we are. There was never any encouragement for us to be anything but that. No one, as far as I know, has ever encouraged the diocesan priest to independent activity, to be creative, to stand up to authority, to have the courage of convictions, or to take risks. We were never trained to do that.”

The Rev. James F. Keenan, professor of moral theology at the Weston Jesuit School of Theology, said that ethos is now changing.

“I think priests are finding that their congregations want to hear them say something and a lot of clergy are wondering how they can speak in a culture in which we’re silent on a lot of issues simply because this is an authoritarian structure.”

The Rev. Francis J. Cloherty, pastor of St. Patrick Church in Brockton, said he hopes one of the effects of the abusive priests scandal will be revamped clerical personnel policies, where candor will be a watchword.

“If a priest was stealing money, I have a feeling that the pastor would have been told to keep him away from the collection,” said Cloherty, adding later: “How can a guy run a parish if you don’t know who you’re dealing with?”

Cloherty said that after receiving two complaints 20 years ago about a pedophile priest in another parish, he reported the alleged offender to the archdiocese. “The person was removed and sent off for treatment and ended up in another parish,” said Cloherty.

Jay Mullin was removed and sent off, perhaps for the last time, on Dec. 1, when the chancery’s personnel office removed him from his duties as chaplain at a Brockton nursing home.

Mullin said he told officials at St. Joseph’s Manor that there was an allegation of molestation against him.

Sister Mary Valliere, general superior of the Sisters of Jesus Crucified, which owns the nursing home, acknowledged that Mullin told her of the accusation against him. But Thomas Brown, its chief executive officer, said he did not learn of it until Mullin was on his way out.

Brown, who praised Mullin’s work, said the former chaplain’s background was not disclosed to him.

“It’s like a land mine waiting to go off at some future date,” said Brown. “As CEO, had I known that, I probably would not have entered into an agreement with him to provide services until that was resolved.”