Originally published in The Vacaville Reporter on October 5, 2015 By Kimberly Fu. 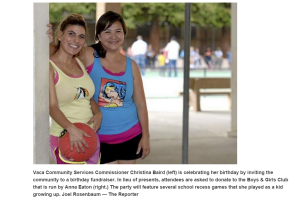 Remember the fun of old school recess breaks, when you’d hang out with friends and play games like Four Square, Dodge Ball, Kick Ball and more?

The celebration is slated for 11 a.m.-2 p.m. at Vaca Pena Middle School, in the multipurpose room and surrounding fields. Adults are welcome to attend the throwback-themed event — come dressed in a favorite old school workout gear — and in lieu of gifts, make a financial donation to the Boys & Girls Club or bring some school supplies.

Her aim, she said, is to have some fun and support kids, because what could be better? 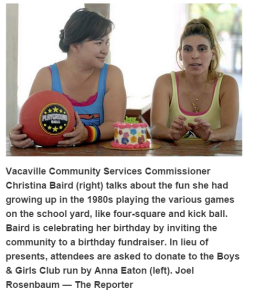 “It’s about getting together, spending time together,” she explained.

Since turning 40 almost three years ago, Baird has made her birthdays count.

Baird has talked openly and publicly about being abused as a child. The Santa Rosa Boys & Girls Club, she said, was her refuge, a place she felt safe and where she could escape by exploring creative efforts.

That’s why she’s uplifting the Boys & Girls Club for her 43rd birthday, having spent previous ones making a gigantic community necklace, ziplining with her son, Christopher, and distributing backpacks to those in need.

“It’s a chance to just be free and be a kid,” Baird said, of the upcoming event.

All items donated for the party — like megaphones and balls — also will be donated to the Boys & Girls Club.