Home How Far Will I Run Book Why Am I Uncomfortable Getting Close To People? (And What Can I Do About It?)

Why Am I Uncomfortable Getting Close To People? (And What Can I Do About It?) 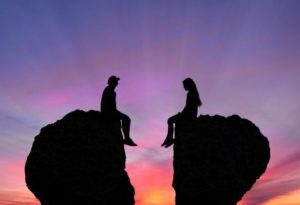 Many of us are hesitant to get emotionally close to others. Getting close means sharing feelings, thoughts, wishes and dreads – sharing our true selves, flaws and all, with someone who accepts us as we are.

Yet many of us wish we were not so hesitant. We yearn for intimacy. We yearn to be known. And, we often feel lonely. But we also remember that closeness has been and might again be risky, even dangerous .

George, for example, dreamed of falling in love and getting married. But as soon as he dated a person exclusively, his heart changed. When I asked him to check inside to put more language on his heart experience, he told me he felt a wall inside. He held his hand, palm in front of his heart and gestured up and down, showing me where he physically felt his wall.

The great news is that there are many things we can do to melt our walls and expand our emotional tool set to have more satisfying relationships. The key is to take baby steps: make small, manageable movements toward intimacy that make a big difference over time. When we ultimately share authentically with someone who loves and accepts us, flaws and all, we feel better in life. A lot better.

If we avoid intimacy now, there WAS a good reason

Defenses are compromises the mind develops to cope with uncomfortable feelings. Many of us as children or adolescents shared our feelings with the “wrong” person – someone whose response was to humiliate or reject us. Just think of a sad, crying boy whose father’s response was to say, “man up!” That kind of a response evokes unbearable shame. As a response, the child (unconsciously) builds a wall to defend against sad feelings and future humiliation. The less he feels his sadness, the less likely he is to end up being humiliated again. Makes sense!

George’s wall was a clever defense he developed to protect himself from this kind of hurt. But this clever defense came with a cost. Unfortunately, we cannot both 100% protect ours Self with defenses and have close relationships. A block is a block. Georges protective wall meant he also experienced less joy, calm, support, and overall well-being that comes from close relationships.

Adults can learn to be what I call “intelligently vulnerable.”

George and I used The Change Triangle as a guide to help him understand and manage his anxiety about being close. On The Change Triangle, George’s wall was considered a defense since it blocked anxiety and shame as well as core emotions, like fear, that intimacy always brings up.

George was sick of his wall and its consequences. He wanted it to go away. So he decided to learn when and why the wall came into being, specifically what the wall protected him from, and what he feared would happen if he didn’t use his wall.

What George found was that his wall protected him from rejection. He feared he’d be judged for his needs for love and affection, his cleanliness “quirks” and his core emotions, like sadness and fear.

George slowly learned that he could protect himself in healthier ways. We don’t need to expose our deepest most vulnerable selves to others too soon. We can get to know people and test the waters for who is safe: who is curious, kind and empathetic and who will not shame or criticize our personhood.

As George learned to be intelligently vulnerable his wall slowly melted. He fell in love again, this time moving more slowly and building a strong partnership based on trust. He needed and took lots of time alone. But when he connected, he did so authentically. He felt deeply known and loved for the first time in his life! He noticed his wall pop up from time to time, and he understood why. And now he had the option to lower the wall and talk about his vulnerable feelings. He shared his true self more and more, and with this newfound authenticity he felt better. Much better.

What are your walls protecting?