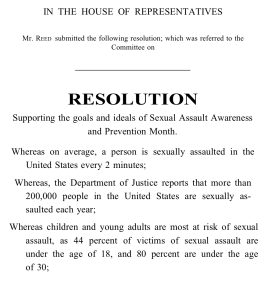 Members of Congress, in a new House resolution, are calling attention to the vast scope of sexual violence, and calling upon organizations and individuals to do something about it. In preparation for Sexual Assault Awareness and Prevention Month (SAAPM) this April, Rep. Tom Reed (R-NY) sponsored a Congressional resolution that honors the nation’s work to combat sexual violence and highlights the services of the National Sexual Assault Hotline and Online Hotline, as well as the the DoD Safe Helpline, Safe HelpRoom (now open 24/7), and Safe Helpline mobile app, all operated by RAINN.

Every 107 seconds, someone in the U.S. is sexually assaulted. That makes for about 293,000 victims of sexual violence every year (among victims age 12 or older). While sexual violence has declined by more than 60% in the last two decades, it is still a crime that impacts nearly every family in America.

The Congressional resolution emphasizes that children and young adults are most at risk of sexual assault, as 44% of victims are under the age of 18, and 80% are under the age of 30. Additionally, according to the Department of Justice, all 18- to 24-year olds are at significant risk of sexual assault, whether they are in college or not. Female college students in that age range are about five times more likely to be sexually assaulted than the population at large, while non-students the same age are about six times more likely.

Take action with RAINN this April to support survivors and join the fight against sexual violence.

If you or someone you know has been affected by sexual violence, it’s not your fault. You are not alone. Help is available 24/7 through the National Sexual Assault Hotline: 800.656.HOPE and online.rainn.org.