Sweetie will Need a African sister 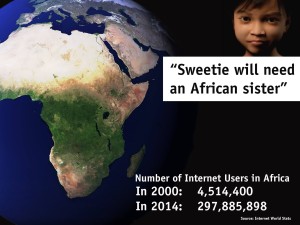 In a country where Internet access has developed significantly in recent years, there are concerns about children joining new media, accessing adult content and, worse, falling prey to online abuse. ESTHER KIRAGU takes a look at the issue and talks to an expert in the area.

In this era of advanced information technology, a lot has changed in the way we communicate. Information is now transmitted from one part of the world to another in real time at the click of a button. Internet can be accessed via a desktop computer, laptop, gaming devices, tablets, and increasingly through mobile phones due to availability of affordable internet-enabled devices.

A UNICEF study done in Kenya in 2012 and results released in 2013, and whose objective was to evaluate issues of issues of digital access to young people and their knowledge and emerging practices, showed mobile penetration was over 75 per cent and Internet penetration stood at 28 per cent.

Along with offering a fascinating new way to connect with the world, the Internet also offers new risks including Internet addiction, cyber bullying and exposure to inappropriate material including pornography and security threats as a result of revealing too much personal information. The most addictive sites are said to revolve around pornography, entertainment, relationships and social networking. Some of these sites could be harmful, especially to young people, and it is important to be discriminating when accessing information from the Internet. Lets examine the dangers posed by some of these sites.

In the past, pedophiles were known to only molest children physically but now, with the proliferation of high-speed Internet, they can do it online from the comfort of their homes. Technology has opened ways for pedophiles to contact children through social networks, chatrooms or even on their mobile phones to begin conversations that lure them to send indecent pictures of themselves, appear naked or perform sexual acts on webcam. Threats of exposure are often used if the child doesn’t continue performing more sexual acts. At times promises of rewards are given to encourage the child to continue with the behavior.

In 2012, Terre des Hommes, an international organisation based in Netherlands, raised the alarm on a largely unknown, but quickly spreading new form of child exploitation via webcam that involves tens of thousands of victims, especially in the Philippines, referred to as webcam child sex tourism (WCST). WCST takes place when an adult pays or offers a reward to a child in order to direct and view live streaming video footage of the child performing sexual acts in front of a camera. Terre des Hommes prevents child exploitation in developing countries and helps get children out of exploitative situations and also secures safe environments for them.

In less than two and a half months Terre des Hommes researchers identified over 1,000 adults willing to pay children in developing countries to perform sexual acts in front of the webcam. With the help of a virtual 10-year-old Philippine girl going under a false name – Sweetie – the researchers identified adults from more than 65 countries involved in this sexual exploitation of innocent children. The video footage of this research has since been handed over to Interpol to help track down these sexual predators.

Closer home, media reports recently highlighted the extradition case of a Kenyan wanted in the US for operating an Internet-based child pornography syndicate. There are no laws in Kenya that specifically apply to online abuse. However, laws forbidding sexual contact with an underage person apply on Internet abuses but such cases are more difficult to prove. There is, therefore, need for specific laws to be enacted on online sexual exploitation of children. The public also needs more awareness on the dangers posed by the Internet, especially on young children.

Lillian Kariuki, executive director of Watoto Watch Network, emphasizes the need for public awareness on child abuse through social media. Her passion for issues affecting children dates back to her days at Nairobi’s Daystar University where she studied for a degree in community development. An internship in 2010 at the Gender Violence Recovery Centre (GVRC), a charitable trust of the Nairobi Women’s Hospital that provides specialized medical treatment and psychosocial support to survivors of sexual and domestic violence, brought reality to Lillian on what child abuse does to children. She came across children rape victims and this broke her heart. “Although we offered these children support and coping mechanisms, deep in my heart I felt so much damage had been done and yearned to find ways to prevent the abuses,” says Lillian.

After graduating from Daystar, Lillian went for further studies in youth work at Leeds Metropolitan University in the UK in 2011. She had the opportunity to work with the Children’s Society in the UK and this stint exposed her to working with abused children from diverse communities. She attended several training courses dealing with Internet safety for children. “This was eye-opening as I didn’t know the Internet could pose a risk to children. The story of a young girl in the UK who met an older man through social media and went out on a date with him only to be raped and killed, brought the reality of the dangers posed by social media to life,” explains Lillian.

On her return to Kenya, Lillian registered a non-governmental organization (NGO) – Watoto Watch Network – with the aim of utilizing knowledge gained in the UK to highlight child abuse cases in the country. She began operations in February 2013 and partnered with Dolphin Anti-rape, an NGO that delivers life-saving sexual violence prevention education in Nairobi schools. They trained teachers and students on how to recognize signs of child abuse and respond to cases of child abuse.

Lillian has since narrowed the scope of her NGO to focus mainly on child abuse through the Internet. In February 2014 Watoto Watch Network marked the Internet safety day, an annual international day marked on the second week of February to recognize and acknowledge online child abuse and take necessary action. Watoto Watch Network partnered with several organisations including the Communications Commission of Kenya (CCK) and the Internet Society of Kenya and engaged over 150 students from various high schools in Nairobi on the need to use Internet responsibly.

In 2010, UNICEF’s social and civic media section launched the Voices of Youth Citizens initiative. This initiative seeks to understand the use of digital media by children and young people in order to support awareness-raising and advocacy efforts and minimize the risks that digital media poses. Through various research findings by UNICEF, there is an acknowledged gap between parents and their children’s interaction on social media. This is due to a number of factors including low levels of digital literacy by parents, teachers and caregivers. Many children fall prey to online sexual abuse without the knowledge of their parents or caregivers, hence the need for these important individuals in a child’s life, to learn basic tips on Internet safety in order to protect children. With such knowledge they can establish safe online limits for the children by red-flagging dangerous sites and limiting access to others, and also recognizing telltale signs of online abuse.

Lillian says it is the responsibility of parents or caregivers to keep a tab on what the child under their care is doing online. “It is important to engage with children on issues pertaining to social media by letting them know the dangers posed by chat room messages, giving too much personal information, and revealing personal address as these could be used against them,” says Lilian.

Parents and teachers should help set rules for children on social networking, instant messaging, e-mailing, online gaming and using webcams. Children should also be encouraged to create a screen ‘on-line name’ so as not to reveal their real identity to virtual strangers.

“You should also consider an Internet service provider that comes with parental control features. You can also purchase software to block access to “bad sites” by children. There should also be continuous dialogue with children about Internet safety,” adds Lillian.

“Many parents are ignorant on Internet use and some consider it too complicated for them, and so don’t bother to know how their children are using it. Many are not even aware that there are age limits for certain social media networks because of the adult content. Parents can greatly help their children if they become involved in what they are doing on social media,” Lillian advises.

Lillian also says the government through CCK should do much more to prevent online child abuse. She reckons that the mobile phone providers should be prevailed upon to control information sent on-line through social networks and all ISPs be obligated to provide parental control options.

Watoto Watch Network is currently the championing the Cyber safe 100 campaign, with the aim of raising funds to reach 100 high schools in Nairobi in 100 days to teach students about the risks of sharing personal information and photographs on the Internet.

Your child may be at risk of on-line abuse if:

If a child confides in you about abuse through the Internet, it is crucial to believe them, take them seriously and not blame them for the abuse they have suffered. Talk to the child and establish the circumstances around the abuse and report the matter to local authorities. Also seek counseling help for the child.