Home How Far Will I Run Book Believe Survivors 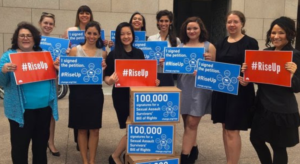 Surviving sexual assault is sometimes only the first part of a long ordeal, but it doesn’t have to be this way. When Grace Watkins went to the hospital after she was raped at 18 by a Notre Dame student while his friends photographed the assault, she was told that it wasn’t really sexual assault. Then she was told she’d have to pay thousands of dollars for a rape kit to prove that what happened was really a crime.

Grace is one of dozens of survivors with the #RiseUp movement which has utilized almost of all of the tools for social change on our platform who has started a petition. Hers is also the story of 25 million Americans — including actress Abigail Breslin, who came forward two weeks ago to commemorate Sexual Assault Awareness Month and break her silence — along with half a million Canadians, and many thousands of sexual assault survivors around the world.

“I came to understand that this is what it feels like to have your rights denied,” Grace wrote. “Injustice is not just bad rules, it is a collection of deeply painful lived experiences.”

Grace is far from alone. Here are four ways you can take action to support the brave survivors of sexual assault who continue to advocate for themselves and others around the world:

+ Support more than 400,000 citizens, including Grace, who are part of the movement to support Common Sense Rape Survivor Rights

+ Ahead of the French election, call on officials to make candidates who have committed sexual assault ineligible for office

+ Tell Twitter to shut down accounts that Tweet rape threats at women in the U.S. and in India #RapeThreatsNotOK

+ Join 26,000 people who want to save the Violence Against Women Act, which provides critical support for survivors, from budget cuts

Although Grace’s life was changed forever like that of millions of sexual assault survivors, in her words, “I continue to fight because I can’t abandon these problems now that I know they are there.” We hope you will join Grace and the countless survivors who also continue the fight.