Nine Vacaville women honored at Women of the Year ceremony

Originally published in The Vacaville Reporter on October 14, 2016 By Jessica Rogness 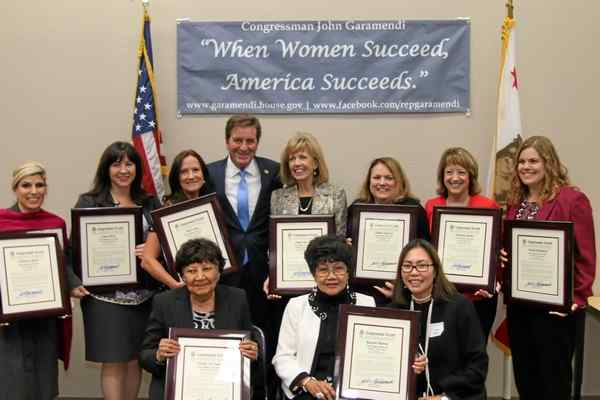 Nine Vacaville women were honored by Congressman John Garamendi, D-Solano, Thursday at his third annual Women of the Year Award ceremony in Woodland.

Christina Baird, Nicole Braddock, Rosario Burton, Sandra Esparza, Dilenna Harris, Julia Lopez, Laura Petty, Carol Pruett and Estella San Juan were among 44 women from across Congressional District 3 who were recognized for their contributions to their communities.

Each was nominated by their peers and “have demonstrated a clear commitment to their community through their leadership and dedication to public service,” according to the congressman.

“This may be my favorite day of the year, because it always replenishes my faith in the selflessness and dedication of my constituents, and it inspires me to look within to see what more I can do to help the people I represent,” Garamendi said in a press release.

The honorees interviewed by The Reporter expressed surprise that they were nominated by their peers.

“I just felt like I don’t deserve it,” Baird said. “I feel like there’s a lot more I need to do before I deserve it.”

Baird owns a public relations and marketing business, Little Wing Connections, through which she focuses on businesses that are “community conscious” — they are aware of how they are connected to other businesses and give back to the community.

Baird serves on the Vacaville Community Services Commission, is a facilitator of Darkness to Light, an organization that works to prevent the sexual assault of children, sits on the board of the Solano Partnership Against Violence and is president of the Optimist Club of Solano County, which assists any organization or program that helps children.

She is a survivor of child sexual abuse and author of “How Far Will I Run.”

“I just hope to educate as many people as possible about boundaries, prevention and disclosure in regards to child sexual abuse,” she said.

Most of all, Baird said everything she does is because of her 14-year-old son Christopher, and teaching him to be aware.

When she listened to the message saying she was a Woman of the Year, San Juan explained with a laugh that she thought it was a joke.

She is an Army veteran who used her GI bill to go to college and earn her masters degree in education.

She said she became interested in scholarships through her Masonic organization Alooma 161 and her sorority Alpha Kappa Alpha, which also participates in the Festival of Trees fundraiser for Opportunity House. She helps feed the hungry at her church, Community United Methodist Church.

San Juan has lived in Vacaville since 1965 when her husband was stationed at Travis Air Force Base.

“It was wonderful, it really was, you can see so many women doing great things for the community,” she said.

Burton expressed her thanks and said the Women of the Year are now a unified group.

She provides counseling and comfort to patients at the David Grant Medical Center at Travis Air Force Base.

A retired psychologist, “Dr. Rose” credits the military for sending her to school after her husband, a soldier, was disabled.

She is also an inventor and author of “Yes, Anyone Can.”

“It’s a magnificent occasion for everyone to be involved,” Burton said.

Esparaza is a former President of the Solano County Soroptomist Club, which advances programs that support women and girls.

“It was a surprise because I don’t see myself like that,” she said of receiving this award.

She was chair for the Live Your Dreams program, seeking out young women to assist them in their aspirations to further their education.

She also is active in Relay for Life and helps carry on the tradition of the Stan Foster Memorial Golf Tournament, a fundraiser honoring her brother who succumbed to cancer.

Esparza is proud to be a third-generation Vacaville resident.

Pruett said she has met “a group of amazing women” who are Women of the Year.

She serves as chief administrator of the Dixon Chamber of Commerce, and also is involved with the Dixon Rotary Club and Travis Regional Armed Forces Committee.

She found out her friend Julia Lopez was receiving the award as well.

“That was just the icing on the cake too, because she just does so much for the community beyond her job,” Pruett said.

She also started an annual Adopt-a-Family Christmas program to provide help through the holidays for Solano County families, and is a former president of the Dixon Rotary Club.

Braddock was recognized by Garamendi for her service as the executive director of the Solano Land Trust, where she has raised more than $20 million for conservation and acquired the 1,500 acre Rockville Trails Preserve.

She helped establish the Napa County Parks and Open Space Council, and is an active volunteer for children’s causes, including the maintenance of trails at the Solano Lake Boy Scout summer camp.

Harris, a member of the Vacaville City Council, was celebrated for her work on the council, as well as the immediate past chair of the Travis Regional Armed Forces Committee and on the Travis Community Consortium.

Also noted was her work as a founding partner in an alternative energy company and as the CEO of a light company.

Petty, the founding partner of her law firm, was commended by Garamendi for making the legal system more accessible for children and the socially disadvantaged.

She served on the Board of Directors for the Vacaville Public Education Foundation and the Vacaville Unified School District Measure A Citizens’ Oversight Committee.

After their commendations were presented, the honorees and Garamendi discussed ways Congress and the federal government can do more to improve quality of life in this congressional district.

The conversation touched on increasing the Alzheimer’s budget, devoting more focus to mental health services, alleviating hunger, and tackling the homelessness crisis, according to Garamendi’s office.