When Men Hating You is a Measure of Success

Originally published on LindsayFischer.com on May 20, 2016 By Lindsay Fischer

I wasn’t sure at first if I wanted to participate.

Don’t get me wrong, I love the idea of the #FacesofPTSD campaign, in which women share photos of themselves with the tagline, “Not all wars take place on the battlefield.” These photos call attention to the issue and help Google to index other images of PTSD that contain something other than men and camouflage.

However, I couldn’t help but wonder what the backlash would be from men. Because it seems that an alarming number of men simply hate women, especially online.

I Don’t Think You Know What Feminism Means

The very same day that the #FacesofPTSD call for photos hit my email inbox, I happened to run across this little gem: 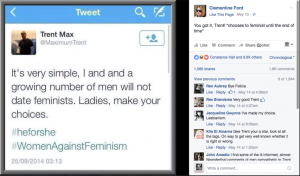 Does this guy really not support the social, political, and economic equality of the sexes? Are there really women who are against these ideals? And how does Trent not know that #heforshe is a campaign by the United Nations for gender equality around the world?

Oh, Trent. Probably more discouraging, though, are the amount of followers and mind-searing comments his compatriots were making about women, comments that I see over and over again when women choose to speak out.

Amy Schumer recently had a sketch on her show called, Welcome to the Gun Show, in which two QVC-types were hawking guns as if they were the latest stylish new purses or the hottest trend in electronics.

It was hilarious. But a lot of men did not think so. The comments burned my eyes, and the absolute least offensive comment I could find about her and this sketch was, “Amy Schumer once again opened her trap about gun control…”

Opened her trap? My first thought was, would you say that about a man?

Second, how is this at all a cohesive argument? They may actually have a few cogent points, like maybe the sketch didn’t present all of the facts and it could have been more carefully researched. But how are we supposed to hear any decent arguments if men simply call women terrible names and refer to their butts?

For example, other of the least offensive comments call her a “fat slob” and a “libtard cow.” They refer to her “chipmunk-cheeked face” and “fat rump” and call her a “stupid fat girl.” The comments get much, much worse from there all across news and social media.

Don’t these men have mothers and girlfriends and wives and daughters? Is this how they really think and feel about the women in their lives?

Why Do Men Hate Women?

I suppose that as a comedian, I should expect that men are going to call me names and automatically refer to my sexuality to hurt me. References to the “c” word – yes, that word – and rape are common, especially by men about women comedians.

How are men not ashamed that I feel that I have to have this expectation? Why do men hate women so much?

A year and a half ago, I confronted the pastor of the church I attended regarding some disagreements I had about the language in the bulletin and gay marriage. My stance was that you can’t claim to “welcome everyone” and then say, “Wait, not you, because you’re gay.”

In his office, I sat across from his desk in a chair that was lower than his. As our conversation continued, he tried condescension, anger, shame, and finally, bullying. Not surprisingly, I experienced a Post Traumatic Stress Disorder event, and haven’t been back to that church since.

However, I was clearheaded enough to figure out what he was trying to do, and came to the conclusion that he either hated women, or he was extremely afraid of them. I know I have a strong personality, but I’m hardly intimidating.

I can’t for the life of me figure out why I and other women pose such a threat because we want to make the same amount of money as men, or we want similar opportunities, or we simply want to express our opinions about what is important to us.

Or if we want the world to understand that women also get Post Traumatic Stress Disorder and we want to fight stigma against the condition.

Regardless of any potential backlash from men, I had to speak out and support my sisters in PTSD.

Not all wars take place on the battlefield.

Kelly Wilson is an author and comedian who 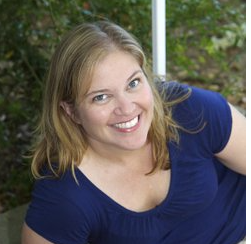 entertains and inspires with stories of humor, healing, and hope. She is the author of Live Cheap and Free, Don’t Punch People in the Junk, and Caskets From Costco. As a survivor of childhood sexual abuse, Kelly writes and speaks about finding hope in the process of recovery. Kelly writes for a living and lives with her Magically Delicious husband, junk-punching children, dog, cat, and stereotypical minivan in Portland, Oregon. Read more about her at http://www.wilsonwrites.com