Originally published on Downtown Devil on February 5, 2016 By Holly Bernstein. 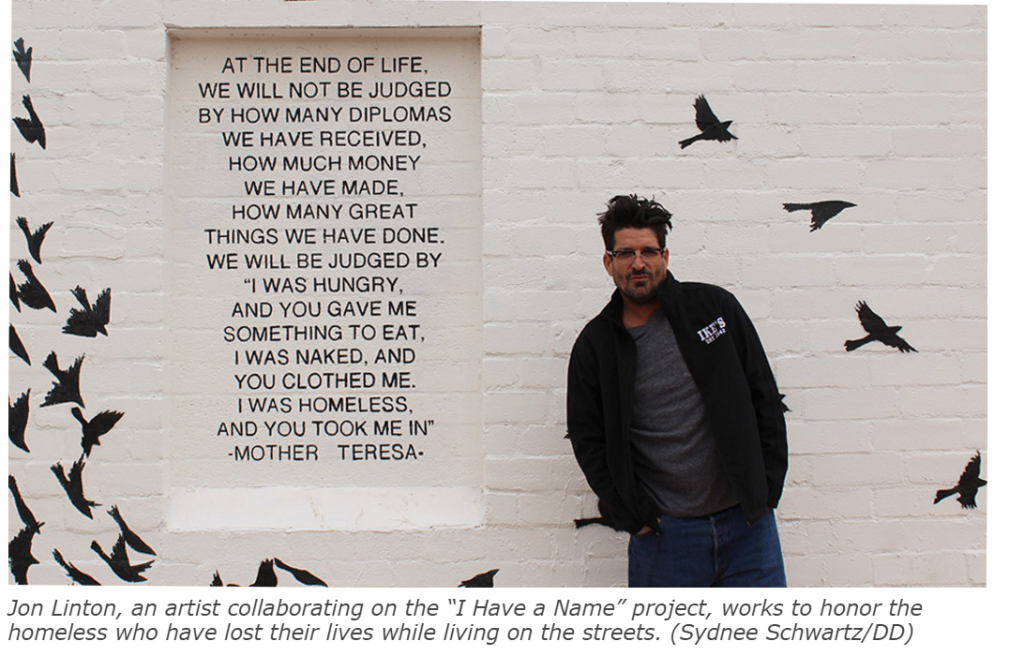 “My daughter has a name and now she’s gone.”

After receiving this Facebook message from a mother whose homeless daughter was murdered while living on the street, homelessness activist Jon Linton used social media to raise money to bring the girl’s body home.

When local artist and activist Wayne Rainey made the west wall of the MonOrchid building available for a public piece of art, Linton approached Rainey in the hope he could use the wall as a way to honor homeless people who died on the street. The mural project began over a year ago as a collaboration between Rainey, Linton and artist Brian Boner.

“The inspiration was this little girl who died in Seattle, homeless, and her name is Summer Francis Smith,” Linton said.

On Friday, Feb. 19, Linton’s larger “I Have a Name” project will host an event at the newly completed mural, titled “The Garden,” at MonOrchid at Second and Roosevelt streets. There will be a candle lighting and vigil in memory of the lost lives of the homeless in Phoenix. The event will start at 6 p.m.

Alongside working on the mural, Linton has been running the “I Have a Name” project, in which he documents the homeless on the streets of Phoenix and does one-on-one outreach with homeless individuals. An inspiration for his project, which began in September 2007, came from his friend and business partner who had passed away after relapsing on heroin and becoming homeless. The project is a way for Linton to honor his friend’s memory by telling the stories of people in need.

Linton’s interaction with a homeless man was the namesake of the project.

“I realized that after we started to talk that I didn’t introduce myself. I said, ‘I apologize. My name’s Jon. What’s your name?’ When I asked his name, he began to weep and said, ‘You have no idea how long it’s been since somebody’s cared to ask me who I am.’ At that moment the project became ‘I Have a Name.’”