Home How Far Will I Run Book A church seeks healing 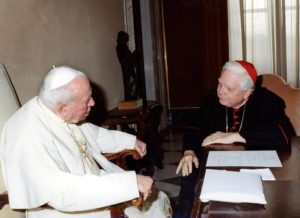 Pope John Paul II and Cardinal Bernard F. Law in a private audience at the Vatican. The pope made no public comment.

Cardinal Bernard F. Law of Boston is expected to leave Rome this weekend for an unknown destination and uncertain future, as Catholics throughout the United States struggle to repair a church deeply wounded by the clergy sexual abuse crisis that Law came to symbolize.

Pope John Paul II, in a dramatic recognition of the damage done to the church by Law’s repeated failure to remove abusive priests from ministry, yesterday accepted the resignation of the longtime Roman Catholic archbishop.

The move brought an ignominious end to the tarnished career of one of America’s most prominent churchmen, who had lost the confidence of many Catholic laypeople and priests after a year of brutally damaging revelations about scores of priests who over a period of decades had kept their jobs despite raping, molesting, and groping children and adolescents.

In Rome, the pope made no public comment, and the brief Vatican bulletin said nothing about the reason for Law’s departure. Law issued just a brief statement of apology, and his spokeswoman said he would return to an unspecified part of the United States this weekend.

But in the United States, Catholic leaders and laity reacted with a sense of sadness and hope, stunned by the tragic ending to a once-formidable career, but relieved that the church could now endeavor to move on from a bruising debate over Law’s future.

”This resignation represents a significant step forward in the healing process, for abuse victims not only in the Boston diocese, but in dioceses across the country,” said Bishop William S. Skylstad, vice president of the US Conference of Catholic Bishops. “To restore trust and faith in our church, we must be held accountable. Today’s action sends a strong message that all priests and bishops will be held accountable.” 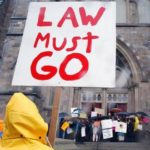 Law’s resignation – after 11 months of apologies, explanations, and policy changes – ends an unprecedented rebellion by outraged Catholics against a man who was once the most influential American Catholic prelate, a man who had enjoyed easy access to the pope and the president, a man who wanted a legacy built on his passionate work against abortion and for Catholic-Jewish relations and his articulate explication of the church’s foreign policy beliefs.

But the broader concerns stirred up by the crisis – over who can become a priest and how power is wielded within the world’s largest religious denomination – remain very much alive.

And the wounds are real: Law leaves behind an archdiocese in financial and legal turmoil, with more than 500 pending lawsuits by victims of clergy sex abuse, and coffers so depleted that church officials are pondering filing for bankruptcy. Mass attendance has been falling as Catholics flee in disgust at stories of how their spiritual leaders failed to protect their children.

”The spiritual damage is incalculable,” said Governor Frank Keating of Oklahoma, chairman of a national review board appointed by US bishops to monitor church compliance with their abuse-prevention policy. “How many children have dropped out of Catholic school? How many parents have declined to put their children in Catholic school? How many young people have decided not to continue religious life? How many people have left the Catholic Church? This is absolutely horrific.”

As Catholics try to figure out how it happened that hundreds of priests abused thousands of children over the second half of the 20th century, frequently with little apparent repercussion on their careers, many are wondering about the nature of the Catholic priesthood, an essential component of a sacramental faith. Liberals are pushing the notion that the Catholic clergy should be opened to women, or married men, while conservatives are suggesting the priesthood be closed to gay men.

Law is now out of that debate, at least as Boston’s archbishop.

”To all those who have suffered from my shortcomings and mistakes, I both apologize to them and beg forgiveness,” he said in a written statement. “The particular circumstances of this time suggest a quiet departure. Please keep me in your prayers.”

The pope appointed the rector of St. John’s Seminary in Brighton, Bishop Richard G. Lennon, as the apostolic administrator for Boston. In that capacity, Lennon will oversee the archdiocese as the pope searches for a new archbishop – a process that could take months.

”Cardinal Law has acted forthrightly and contritely in offering his resignation to the Holy Father,” said Archbishop Harry J. Flynn of St. Paul-Minneapolis, who is considered a possible successor to Law. “Let us all pray that this is another step, along with the new US bishops’ Charter for the Protection of Children and Young People, that will advance the healing from this tragic chapter in the history of the Catholic Church in America.”

Law, 71, is by far the highest-ranking American church official ever to lose his job as a result of scandal, and he is the first American bishop to lose his job for mismanaging sexually abusive priests. The Archdiocese of Boston, with an estimated 2 million Catholics, is the fourth-largest see in the United States, and is by tradition one of the most important.

His resignation was welcomed by laypeople and priests who had been clamoring for his departure. Over the last few weeks, the lay group Voice of the Faithful, the Parish Leadership Forum, and, most significantly, 58 priests had demanded that Law leave.

”This is a terrible day in terms of the history of the church,” said James E. Post, the president of Voice of the Faithful, a group founded in February in Wellesley by Catholics unhappy with the church’s handling of sexually abusive priests, “because these events have brought the church to its knees in some ways, and the departure of Cardinal Law is a symbol of all that. But it’s also a day that we have to be hopeful that a healing process can begin that was not possible with Cardinal Law here.”

As Catholics – who are by far the largest religious group in Eastern Massachusetts – woke up yesterday to the news from Rome, many were relieved.

”This should teach a lesson to the people in charge, to someone like him,” said Emile Guerrier of Mattapan. “I think the church was really protecting themselves and they didn’t really care about the children. A lot of children got hurt because of that.”

Law, who has been in Rome since Sunday to discuss the crisis afflicting the Archdiocese of Boston, had spent the last 11 months trying to repair the damage done to his image and to the vibrancy of his church by the repeated disclosures that he had kept on the job dozens of priests who had sexually abused children and adolescents.

He tried to explain away his conduct as a result of insufficient understanding of the nature of sex crimes, as a result of bad advice from physicians, or as a result of bad record keeping. He apologized in a variety of ways. He changed the policy locally – removing more than two dozen priests from ministry this year under a new zero-tolerance policy – and supported a new national church policy on child protection.

But none of the changes were enough in the face of a year of astonishing revelations and disastrous public relations. There are now more than 500 people suing the Archdiocese of Boston, claiming to be victims of abuse by priests.

”The key development was the loss of support on the part of his priests – there were editorials, statements by leading Catholics . . . and continued revelations, but the straw that broke the camel’s back was that it was clear he had lost the support of his priests, and no bishop can continue then,” said the Rev. Richard P. McBrien, a theologian at the University of Notre Dame. “Law’s resignation is unprecedented – this is the cardinal-archbishop of one of the premier archdioceses in the whole world – being forced to resign.”

The scandal, which surfaced in the early 1980s in Louisiana, arrived in Massachusetts in 1992 with widespread publicity over the case of the Rev. James R. Porter, a Fall River priest who sexually abused boys and girls in five states during the 1960s and 1970s.

At first defensive, calling sexual abuse of minors by priests “the rare exception,” Law imposed a new stricter policy in Boston in 1993, but did not require that all abusive priests be ousted. This year, the scandal exploded with revelations that Law and his assistants had known that the Rev. John J. Geoghan was an alleged abuser and yet reassigned him. Over the course of the year the church has been forced to reveal that many other abusive priests were similarly reassigned.

The scandal, which has roiled dioceses across the nation and has forced the ouster of several hundred priests, has been extraordinarily damaging to the largest and most influential religious denomination in the United States.

In Boston, the scandal has already cost the church tens of millions of dollars and the bill to settle outstanding cases could cost as much as $100 million more. Pastors here report that attendance is down and contributions are off, and the church’s once-loud voice in the public square has, at least momentarily, been muted.

”This is the first bishop in the United States that has had to resign over this crisis, and he’s a cardinal, so I think it sends a message to everybody, inside the church and outside the church, that the church gets it,” said the Rev. Thomas J. Reese, editor of America magazine, the Jesuit weekly. “There is no more business as usual. People are going to be held responsible for what they did.”

Nobody expects repairing the archdiocese to be easy.

”I hope and pray that Cardinal Law’s decision to resign as Archbishop of Boston will be the catalyst for the healing that so many are searching for,” said Bishop Daniel P. Reilly of Worcester. “The road to healing for all people in the archdiocese will continue to be long.”

Law’s resignation brings an end to a year he has described as a nightmare, and a career many had seen as a dream.

Law himself expressed relief – he reportedly had volunteered to resign in April, but was asked by the Holy See to stay on.

”I am profoundly grateful to the Holy Father for having accepted my resignation as archbishop of Boston,” Law said in his statement. “It is my fervent prayer that this action may help the Archdiocese of Boston to experience the healing, reconciliation, and unity which are so desperately needed.”

Born in Torreon, Mexico, where his father was stationed with the US military, Law moved frequently as a child. He was schooled in New York, Florida, Georgia, and Colombia; he graduated from high school in the Virgin Islands and listed Panama as his home at the time of his graduation from Harvard in 1953.

Law’s father was Catholic, but his mother was not; a Presbyterian, she converted to Catholicism in the 1950s.

At Harvard, he studied medieval history before graduating in 1953. He was ordained in 1961 after studies at St. Joseph’s Seminary in Louisiana and the Pontifical College Josephinum in Columbus, Ohio.

As a young priest in Natchez, Miss., Law was active in the civil rights movement, so much so that his life was threatened.

Ambitious, politic, and in step with the doctrinal conservatism of the church, Law rose steadily through the ranks. In 1968, he was sent to Washington, D.C., to serve as executive director of the National Conference of Catholic Bishops’ Committee on Ecumenical and Interreligious Affairs.

He was appointed bishop of the Springfield-Cape Girardeau Diocese in Missouri in 1973, and was named the eighth bishop of Boston in 1984, succeeding Humberto Medeiros, who had died four months earlier. The following year, Pope John Paul II named him a cardinal, granting him the red hat that signified his role as a prince of the church.