Home How Far Will I Run Book Battle over files intensifies

Originally published in the Boston Globe on December 1, 2002 By Michael Rezendes. 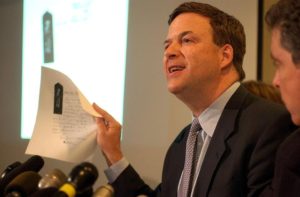 Roderick MacLeish Jr., who represents more than 200 alleged victims of sexual abuse, has said he’ll ask for a determination on whether the archdiocese has obeyed court orders.

The church was ordered by the courts to produce all its files on Shanley months ago, but has turned them over sporadically. Now, Roderick MacLeish Jr. of the Greenberg Traurig law firm has served church officials with notice that he will ask the court to schedule an evidentiary hearing to determine whether the archdiocese has obeyed court orders.

Sources close to the archdiocese who are knowledgeable about the issue said church officials attempting to comply with the court’s orders believed they had established a sound working relationship with Greenberg Traurig.

But in a Nov. 27 letter to Wilson Rogers Jr., the lead attorney for the archdiocese, MacLeish brushed aside a church promise to deliver the four boxes within 24 hours. “I should have received these last April,” MacLeish wrote.

The newly found records mark only the latest in a series of embarrassments for church officials. Rogers recently filed an emergency motion to seal 11,000 pages of church records concerning allegations against 65 priests, only to be admonished by Superior Court Judge Constance M. Sweeney for engaging in “an increasingly dreary effort” to delay or limit the production of church documents.

In April, after producing 800 pages of internal records about the church’s knowledge of complaints against Shanley, church officials announced only two weeks later that they had found another 800 pages.

Rogers has taken the heat for such missteps, but others who have been involved in the process said the church’s chaotic record keeping and the inexperience of chancery officials have created a nightmare for the Rogers law firm.

One person involved in the process, who spoke on the condition that he not be identified, said the archdiocese retained records of sexual abuse by priests that in some cases date back to the 1930s. In any well-run organization with a reasonable document retention policy, this person said, most of the older documents would have been destroyed long ago.

Meanwhile, he said, the archdiocese has found overlapping records in such disparate places as its secret archives, its regular archives, its personnel files, the office of the priests who have been in charge of such cases, the personal files of Cardinal Bernard F. Law and other officials, and the Creagh Research Library at the chancery.

Walter V. Robinson of the Globe staff contributed to this report.