Originally published on Time Warner Cable News on May 14, 2015 By Mark Goshgarian. 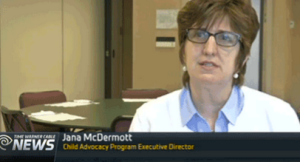 It’s a problem that affects one in 10, or 3,000 children in Chautauqua County.

“Imagine 41 school buses of children. That’s about how many children are being sexually abused and by in large, we’ve haven’t addressed it,” said Jana McDermott, Child Advocacy Program Executive Director.

To help combat abuse, the Child Advocacy Program, or CAP in Jamestown is offering a training program called Stewards of Children.

“Child sexual abuse is likely the most prevalent problem that children face today. If you took it in medical terms, this would be an epidemic,” said McDermott.

CAP says it wants to train 5,000 adults, including parents, caregivers, teachers and those without kids. The goal is to prevent abuse from happening and teach people to recognize when it does.

“Be much better informed, have more confidence, be more comfortable making a report of something they have seen, they’ve been concerned about, they have a suspicion,” said McDermott.

Barber is a trainer and has seen the affects of child sexual abuse firsthand.

As part of the two hour training, participants get a workbook, watch a video, and engage in discussion.

“They’re going to feel empowered to prevent child sexual abuse from happening to their own children, perhaps in their home, prevent it from happening in their workplace, in our community,” said Barber.

The cost is $10. McDermott says that’s a small price to pay in a community where 90 percent of those abused are done so by someone they know and trust.

“It’s our moral obligation to ensure that children are protected. We will go anyplace at any time to ensure that adults have the training they need to protect children,” said McDermott.