Originally published in the Daily Republic on March 15, 2015 By Amy Maginnis-Honey. 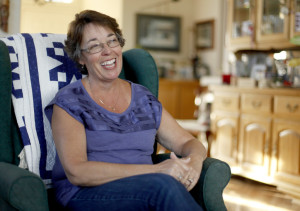 Carolyn Wold may have retired from serving as director of the Solano Family Justice Center but she’s still volunteering in the family violence prevention field.

Wold is this year’s Ruby Award winner. She will be honored March 17, along with two other women, at the Soroptimist International of Central Solano County meeting.

The award is given to a woman who has worked to improve the lives of girls and women through their professional and/or volunteer work. Wold qualifies in both area.

The cash prize that accompanies the award will be given to the Safe Harbor Supervised Visitation Program, a collaborative effort that involves several local agencies. It provides supervised visitation for children and their noncustodial parents in situations that involve domestic violence and child abuse.

Wold helped launch the Family Justice Center in Fairfield. It opened in April 2013.

Planning got underway several years ago when Wold worked for then-Solano County Supervisor Barbara Kondylis and discussion began on uniting services for domestic violence victims under one roof.

An average of 50 people gathered monthly for about 18 months to devise a strategic plan for the center. Wold recalls that time fondly.

“It was exciting in that environment,” she said. “It was pretty fun getting the building and get it set up for the purposes we needed it for.”

Stepping down from the center was no an easy decision.

“It was time to see what a new set of eyes could do,” she said.

Wold did the same with the Court Appointed Special Advocates program in Solano County. The program advocates for abused, neglected and other identified children within the court system. Wold oversaw that program in her post as director of the Office of Family Violence Protection.

While working for the McDonald’s corporation, she heard the expression, “When you are green, you are growing. When you are ripe, you’re rotting.”

“It’s exciting to take a great program and take it to the next step,” she said.

Wold, who earned a bachelor’s degree in business, is also a personal chef.

She was honored in 2014 as the Women’s History Month Committee’s Woman of the Year, a program administered by the Solano County Library Foundation.