Originally published on Identities.Mic on February 25, 2015 By Julie Zeilinger. 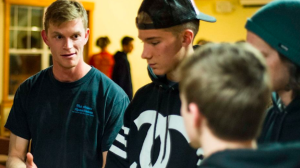 The movement to combat sexual assault on college campuses is well underway, and there are plenty of courageous women fighting for much-needed justice. But national campaigns and thought leaders alike have noted that in order to truly achieve deep-seated change, men must engage with this movement as well.

Exactly how to do this is up for debate, but several male advocates are actively searching for the answer. Jonathan Kalin, founder of the organization Party With Consent, Eric Barthold, facilitator of the program “Man Up” and Open Up and Colin Adamo, of Hooking Up and Staying Hooked, are all working to challenge society’s harmful messages about masculinity and sexuality, as all three believe these forces to be at the heart of the issue.

“Fixing” the pervasive problem of sexual assault is, of course, a herculean task, but we can start, these advocates argue, by revolutionizing our approach to sex education — especially among men.

Here’s what we need to do to target one major cause of sexual assault, according to the men at the heart of this work.

1. Sex education needs to be comprehensive — not abstinence-only.
“I think sex education today fails to discuss sexual intimacy in a context that is truly relevant to young people’s lived experiences,” Adamo said. “Curricula and educators often limit their discussion of sex to its wealth of potential negative consequences or to its reproductive capacity. This does little to pull young people into an engaging educational environment where they can attain information to put to use in their day-to-day lives.”

He’s right. Only 22 states and the District of Columbia mandate comprehensive sex education, according to the Guttmacher Institute. Even worse, between 1996 and 2009 more than $1.5 billion of federal funds were spent on abstinence-only sex education programs, despite the fact that such programs have been proven to be ineffective.

2. Sex education needs to happen early, before the media steps in.
The key, these advocates note, is providing comprehensive sex education early, before men and women alike are indoctrinated with harmful messages about sex by the media. “It’s unfortunate that we’ve denied young people access to sex ed that provides better models of sexual intimacy and that instead they have to turn to movies, music, TV and pornography for these lessons,” Adamo told Mic.

This is why Eric Barthold educates middle and high school boys about sex through his organization “Man Up” and Open Up. He hopes that doing so will help boys “recognize and break free from the gender pressures all around them before these norms become fully entrenched.” He continued, “Middle school and high school students are still trying to figure out their [identities], and if these conversations occur during that time, they are much more likely to remain resilient to the messages telling them to conform to this impossible definition of masculinity.”

3. Sex education should be positive.
Our culture persistently associates sexuality with shame, especially in abstinence-only curricula wherein sexually active teens have been compared to everything from dirty tape to a cup of spit. But instead of trying to convince young people not to have sex and making them feel bad about it if they do, we need to encourage teens to approach it from a place of consent and healthy intimacy.

Kalin notes that although “we’re nurtured to understand consent from a very young age” through notions like “sharing is caring” or asking before taking somebody else’s toy, “we do not bridge that gap into sex.” Doing so early and often, he asserts, would do much to combat the lack of consent that persists on college campuses.

4. Sex education must not overlook men’s interest in relationships.
Adamo said that, contrary to popular belief, plenty of men “are interested in having sex within the context of a romantic relationship.” And yet, “Most sex ed zooms right by the relationship and right to the sex.” Acknowledging how crucial values like mutual respect are, Adamo argues, is important. Keeping the conversation about sex healthy and positive in general, according to these advocates, will help combat unhealthy conceptions of sex that can lead to violence.

5. Sex education needs to counter destructive masculinity standards.
Another major contribution to sexual assault, these men assert, are a variety of unhealthy standards of masculinity with which men are indoctrinated from a young age. “There is a real pressure to treat interactions with women as goal-oriented, with the goal being sex by any means necessary,” Adamo told Mic. “This means that some men are determined to use women’s bodies as objects for their own gain without concern for those women’s well being.”

The concept of an “ideal” male sexuality further creates a divide between “good” and “real” men, Kalin notes. Whereas a “good” man “stands up for what’s right, is caring and lifts others up,” a “real” man is “always in control, always finds ways to have as much sex as possible and is often selfishly manipulative to get what he wants.” Kalin believes that men want to be “good” but feel that society dictates they be “real” men instead — a mentality that often contributes to violent behavior. And yet, this dynamic is rarely if ever addressed in sex education.

6. Men need spaces to discuss these issues among themselves.
Ideally, these advocates say, men and women must work together to eradicate sexual assault. “The best conversations are always ones where everyone in a co-ed space feels comfortable to say what’s on their mind and not face judgment,” Kalin said. “Unfortunately, I think it will be a couple of years before that is a reality on college campuses.”

At this point, these advocates argue, men may benefit most from first discussing these issues among themselves. “When I went into the basketball locker room, I found the guys didn’t necessarily have the tools to have a thoughtful conversation on sex and didn’t feel invited to the conversation,” Kalin said, speaking about how he came to do sex education work in male-only groups.

“Party With Consent aims to show how fun and cool it is to rely on comfort, inspiration, compassion and empathy in your relationships, sexual or otherwise, rather than deceit, coercion and manipulation.”

While Barthold also works in male-only groups, he notes that there are downsides to doing so — notably, a lack of empathy for women’s experiences. “While discussing male privilege in a male-only space helps men understand what it would be like to live as a woman, nothing can serve as an equal substitute to actually hearing a woman’s perspective,” he said.

Ultimately, though, Kalin believes that the solution lies in “creating new systems that are better than current norms” and that, in order to do that, men need a safe space to reimagine a world in which it’s “fun and cool to rely on comfort, inspiration, compassion and empathy in your relationships, sexual or otherwise, rather than deceit, coercion and manipulation.”

It’s an admirable goal and a necessary one. Hopefully, thanks to the hard work of these advocates and the countless minds they’re shaping and changing, it’s one that will also soon become a reality.