Home How Far Will I Run Book Larry Bluford 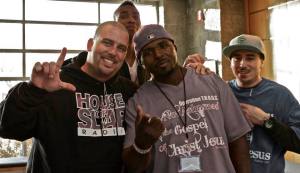 Mr. Bluford was an at risk youth himself, so he knows by first-hand experience what it takes to reach young people in danger of living the life he once lived. The consequence of that lifestyle also caused him to frequent the juvenile system, group homes, and county jail with the final stop being prison. Now he uses those past negative experiences as a tool to influence positivity and show them that they too can turn their lives around.

God gave to me a vision in January, 1997 when I was in maximum security section of Solano County Jail. I was sitting in my cell and God showed me a barren field with nothing but weeds in it. Later He showed me the meaning of that vision. They dry ground represented the cold, dry hearts of the many people in the streets. The weeds represented all the bad seeds that not only I planted but those who lived the lifestyle I lived. God was showing me that He was sending me back into the same communities in which I sold dope, packed guns and lived a cold, vicious thug life and go back to snatch up those weeds and replace them with good seed. I questioned God wondering how could He use me when I have done so much wrong in my life. He revealed to me that is the exact reason why He was using me.

I had no idea what was laid before me but I could only trust God. After all I was on my way to do over 5 years in prison for a crime I didn’t commit. Being in a rock bottom situation I knew I had nothing to lose. I lived a life in and out of the system so although this was my first time to prison I was a little familiar with being incarcerated. This time was different because I was innocent, all other times I was guilty. I believe me being innocent was by God’s design because it broke me down in a way that being guilty wouldn’t have. Have I had been guilty I would have had the attitude that “I did the crime, now it’s time to do the time.” I won’t lie, I was bitter toward God my first day at San Quentin State Prison but that anger turned into surrender. You see the police had a warrant for my arrest, I got on my knees and surrendered to the police. Now in a cell the Holy Spirit had a warrant for my arrest.
Now that I told you a little about me, now please allow me to tell you a little about the ministry. The name Operation T.H.U.G.S. itself is just an attraction tool. The word “Thugs” stand for “The Harvest Unit Gathering Souls”. Initially it appear negative, but in a way I want it to appear negative because those are the kind of kids, young adults and adults I want to attract. Being an ex-thug I have to think like one to know what gives me my best chances of attracting one. For example if I walk into a hood and I got a shirt on that all you can see is big letters reading “T.H.U.G.S.” you would just think I’m another cat on the block. How many of you know, things aren’t always what they seem! As I get closer you see the “Operation” above it but as I get closer you see that there is a Bible verse under it, now you are really wondering, “Hey man what’s that mean.” Gotcha!” I say to myself, there is my opportunity to reach out to that person and share the Gospel through word or simply my actions.We are in a new day and age and therefore we must compromise the method but NOT THE MESSAGE.

The message is always about Christ and Christ only. WE DO NOT PREACH OURSELVES! We cannot be successful unless we first capture their attention. This is something different and radical, in addition it is something that causes curiosity. In order to attract one, I believe you have to think like one. When I was young I wasn’t even approachable to a witness because they tried to tell me about God but they lost me when he said he understood why I felt I had to be in the street. I asked him, “What you know about this? What have you been through?” He said he works with kids like me but personally he had never been to jail. I said, “Man you don’t know anything about this” and walked away from him. Why? He didn’t have any credibility, which I feel is an important edge when you are dealing with these type of people.