Home How Far Will I Run Book Law enforcement, community leaders to gather for summit on inmate release

Originally published in The Vacaville Reporter on November 10, 2014 By Jessica Rogness 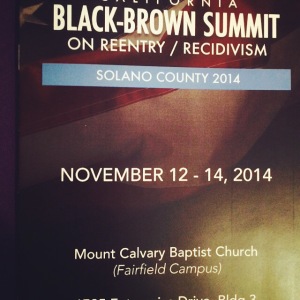 Former gang members and drug users will sit alongside probation officers, pastors and law enforcement, including Vacaville’s chief of police, this week to discuss how to integrate released inmates back into the community.

The discussion workshops will be part of the sixth California Black-Brown Summit on Reentry/Recidivism, which will take place this week starting Wednesday for the first time in Solano County.

The three-day summit aims to bring together local and state leaders to educate participants on the impact of AB 109 and the challenges it poses for law enforcement and community leaders.

There will be workshops on topics such as best practices in law enforcement, working in the prisons, getting former inmates employed and housed, as well as the various faith-based programs available to former inmates.

The summit will also provide insight into life inside the prisons as an inmate. A workshop featuring former gang members who have been incarcerated alongside members of the Solano County Gang Task Force will speak to the racial politics and the “social pecking order” inside the prisons. Another workshop will educate how women’s experience in prison, as well as their needs following incarceration, are different from men’s.

Other panels will discuss topics such as restorative justice, recovering the traditional family unit, additional resources for the recently released, as well as future legislation relating to AB 109.

Deanna Allen, a member of the Reentry Board and spokesperson for the summit, said the workshops and talks on Wednesday and Thursday of the event will be about educating the public, while Friday will discuss what’s next: what went well with the summit and what could be improved at future summits of these kind.

Allen described the summit as a technical training organization, a community organizer, but with local stakeholders involved, including city police departments, Solano County Probation Office and the California Department of Corrections and Rehabilitation.

Vacaville Police Chief John Carli will be a panelist for the “Initiatives in Law Enforcement” workshop with Supervising Deputy Program Officer Ruben Vang and Chief Deputy Donna Robinson, both of the Solano County Probation Office, according to the summit’s most recent schedule listed Monday.

Carli commented on the impact AB 109, just a few years after its implementation in 2011, has had on the crime level in Vacaville.

Known as “prison realignment,” the goal of AB 109 was to reduce the number of inmates in state prisons, because of prison over-population and reduced state funding, by releasing non-serious, non-violent and non-sex offenders. This moved responsibility to the local level and demanded more supervision of former inmates by city police departments.

“The jury is still out on whether or not it’s successful,” said Carli, who later added that realignment has “put a lot of pressure on local law enforcement.”

In the course of the last several years, Carli said 27,000 to 30,000 inmates have been released at the state level in California’s 58 counties. Some of those 30,000 ended up in local jails, but jails are designed for less than a year of incarceration, Carli said.

Then, because of jail overcrowding, there are a number of inmates that did not go from state to local incarceration, but back into the community.

Property crimes are down statewide, Carli noted, but in Vacaville, crime is up 21 percent this year from last year. It is mostly robberies and other “street crimes” that have increased, he said, including an increase in vehicle theft by 75 percent over last year. He cited a connection between AB 109 and an increase in stolen cars in the state.

Vacaville is not much different from other communities, Carli said, but the reasons why retailers and shoppers come to Vacaville are the same reasons that draw criminals. He said the I-80 corridor that runs through Vacaville is a direct pathway for Bay Area criminals, and that criminals often have a need for drugs or for what he called their “incarcerative behavior.”

Carli said that Vacaville is still a “relatively safe community,” but a lot depends on what an acceptable amount of safety should be.

“This is the message as a panelist that I will speak to,” along with other police departments, the Solano County Sheriff’s Office and the probation office, he said.

Carli also said Proposition 47, effective following last week’s election, has implications for crime that are not yet clear. He described the proposition as potentially allowing crimes which used to be considered felonies with jail time attached to them instead becoming citable offenses, similar to a traffic violation.

Carli also noted that the intent of the behavior of a so-called lesser crime is a problem.

He called AB 109 “part one” of the increase in crime, with Proposition 47 potentially becoming “part two.”

Carli said the police department is responsible for compliance checks on PRCS and there are mechanisms to induce “flash incarcerations,” where a released inmate who is not following through is incarcerated. But he emphasized that with an increase in demand, almost 30,000 inmates released, and a reduction in services, with the police department down 20 officers in the last five years, there is still an increase in criminal behavior.

Not that crime would have necessarily been lower with those officers, Carli noted, as he said releasing criminals will increase crime, regardless of whether or not civilians want to think people can change.

“You’re not going to change everyone,” he said.

He does support crime prevention and intervention programs, which he said there is a real need for, and that the sheriff’s and probation offices will speak about those programs at the summit.

“If they (inmates) are released, I would like to see there’s a process,” said Carli.

The Black-Brown Summit will be held at Mount Calvary Baptist Church in Fairfield. A full schedule of events and an online registration form for the summit can be found at www.bbsummit.org.